In 2013, American and British public opinion said “hell no” to plans to bomb (and surely regime change) Syria, taking the momentum out of the march to war. This marked a peak in post-Iraq war-weariness. But then in August 2014, many hearts were touched by the plight of a group of Yazidis trapped on a mountain and besieged by ISIS. So public opinion sanctioned a humanitarian military rescue. During the operation, it was revealed that the crisis was blown way out of proportion, as excuses for war so often are.

Predictably, ISIS retaliated. The group posted snuff films depicting the beheading of western journalists. American outrage was intense enough to allow President Obama to essentially launch a new war on ISIS. And since ISIS was in Syria as well as Iraq, this provided cover for American planes to enter and bomb Syria after all. This too elicited retaliation, in the form of ISIS terror attacks against civilians on western soil: in France, the U.S., Belgium, and elsewhere.

Following these attacks, western war weariness was eclipsed by a resurgent militant hostility toward Muslim peoples. Now America is in a fighting mood, and may be one major attack away from tipping headlong into war fever again. And all it took was less than two years of escalating tit-for-tat hostilities between western militaries and ISIS, starting with the Yazidi rescue, for public sentiment to revert from “hell no” to “let’s roll.” The American war machine is primed and “Ready for Hillary” or Trump.

How did we become so manipulable and herd-like? So easily spooked into hysterical stampedes? So docile and ready to be driven by our government herders over the precipice of war?

In a word, near-universal compulsory schooling. In school, students are not so much taught as they are conditioned. Schooling deeply ingrains certain mentalities that foster militancy: timidity and tribalism, dependency and docility, conformity and credulity. And so schools sow the spiritual seeds of war.

Only a people conditioned from childhood to be easily terrorized will react to small-scale crimes with mass panic. Only a people afflicted with rank tribalism will respond to the murder of a few dozen westerners by a handful of Islamists by sanctioning mass military violence against Muslim populations. Only a people beset with learned helplessness would respond to perceived threats by reflexively offering total deference to the authorities: yielding their freedoms and totally outsourcing the responsiblity to protect themselves and their families. Only a people trained to unquestioningly trust the ordained experts would let themselves be lied into war time and again.

The dependency and docility are cultivated by placing children under constant direction and supervision by teachers and administrators, who bestow favors and inflict punishments at will. Then there is the regimentation: the prescribed classroom routines, constantly being lined up, the P.E. exercises in military drill formation, the assigned movements from cell to cell according to a Pavlovian bell. Francis Bellamy, the author of the Pledge of Allegiance, a daily ritual of professing submission to the State, originally prescribed it to be accompanied by what he termed “a military salute”: the same salute now famously associated with the Nazis. All this conditioning is reinforced by the content of the curriculum, which emphasizes reverence for authority: from its glorification of the police to its cult of the presidency.

The factory schools mass-produce lockstep “patriots,” ready to fall in line in support of whatever war his government has declared, and to hate whichever foreigners his government has instructed him to hate. They also churn out “good soldiers” ready to enlist or be conscripted, and then to lay down their lives if so commanded: the ultimate “pledge of allegience” to the State.

In fact, universal compulsory schooling was invented specifically for this purpose. As John Taylor Gatto wrote in his Underground History of American Education:

“The particular utopia American believers chose to bring to the schoolhouse was Prussian. The seed that became American schooling, twentieth-century style, was planted in 1806 when Napoleon’s amateur soldiers bested the professional soldiers of Prussia at the battle of Jena. (…)

The most important immediate reaction to Jena was an immortal speech, the “Address to the German Nation” by the philosopher Fichte — one of the influential documents of modern history leading directly to the first workable compulsion schools in the West. Other times, other lands talked about schooling, but all failed to deliver. Simple forced training for brief intervals and for narrow purposes was the best that had ever been managed. This time would be different.

In no uncertain terms Fichte told Prussia the party was over. Children would have to be disciplined through a new form of universal conditioning. They could no longer be trusted to their parents. Look what Napoleon had done by banishing sentiment in the interests of nationalism. Through forced schooling, everyone would learn that ‘work makes free,’ and working for the State, even laying down one’s life to its commands, was the greatest freedom of all.”

In school, the teachers, textbooks, and answer keys are dispensers of the “right answers.” This is the prime source of our propensity to gullibly swallow the false narratives and outright fabrications fed them by the “experts” in government and the media to sell each war.

Then there are the emergency drills. The fire drills are still with us. The nuclear terror of duck-and-cover drills have been replaced by the updated terror of active shooter drills. These do nothing to enhance safety. The drills only drill into the developing brains of children trauma, terror, and timidity. They train the public to automatically defer to authority and yield to regimentation and mobilization whenever a perceived threat emerges. 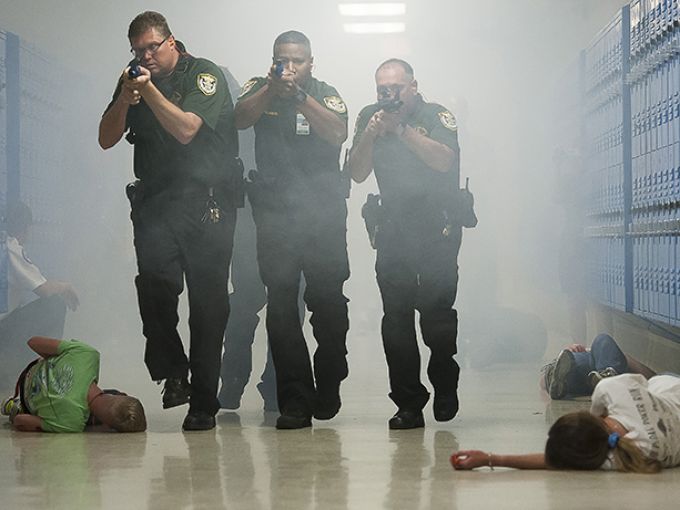 Schools also help to seed the tribal nationalism that is so crucial for war. Pep rallies serve as preparatory play-acting for later participation in war rallies. The kind of sentiments first stimulated as “school spirit” and “team spirit” are later rekindled as militant patriotism. In between wars, and after graduation, the attitude of tribal chauvinism simmers as team sports fandom, ready to be boil over into militant jingoism as soon as a foreign country is designated as a “rival team.”

This too is reinforced by the curriculum, which is suffused by nationalistic myths about past wars. In American schools, the lessons most emphasized revolve around World War II. Largely based on the official narrative of “the good war,” we are indoctrinated from childhood to accept our government’s heroic and indispensible role in the world; the folly of appeasing past and future Hitlers; and the hard but often “necessary” choice to bomb, even nuke, foreign civilians for the greater good.

Schools are hatcheries of the herd-minded, and nurseries of war.