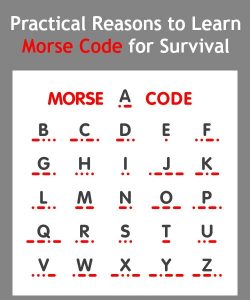 This article is about Morse code and why, as a prepper,you should learn just a smattering for survival purposes.  Before you groan, hear me out.

In the event there is a catastrophic end of the world event, the grid will be down and you will need to communicate your location and your status.  With a few simple Morse code signals, you will have the ability to summon help or to tell the world you are okay.  You will be able to communicate with your peers using signal mirrors, flashlight beams, handheld radios, and even simple, DIY devices. 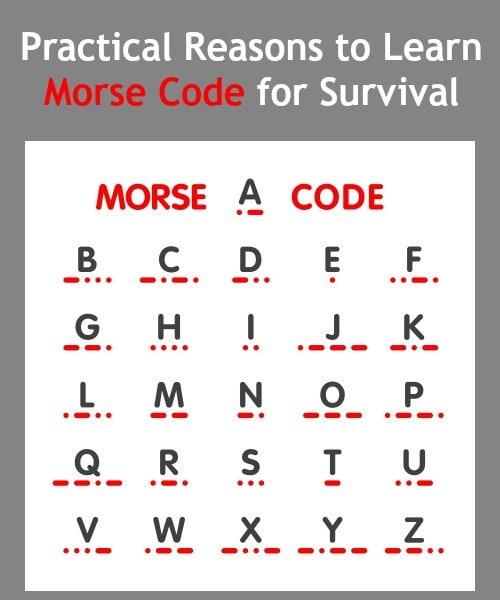 And that is just one example.  As you will learn there are many practical reasons to learn Morse code.  To help you get a grasp on those reasons, I have enlisted my BFF and radio guru, George Ure, to give you some real life scenarios in part one of the series “Morse Code: Becoming a Digital Human”.

Oh, sure, it’s true:  On a Jay Leno show a few years back a couple of Morse code operators were matched up with the world’s fastest texters.  If you haven’t seen the video, check it out.

The answer to the question “what is faster, texting or Morse code” shouldn’t surprise you.  That is because there are those who are “digital humans”, and then there is everyone else.

While it would be “fun” to recount recount a bunch of ham radio stories, for example sending Morse code half-way around the world on less power than a 4-watt flashlight, my buddy Gaye has asked I keep the discussion reasoned and rational.

Tall order, but what Gaye wants, I will do!

Five “Use Cases” for Morse

Let’s go through these in order of statistical likelihood:

1. You have a stroke or are severely injured in an auto accident.  You can only move the toes of your right foot.  You can’t talk because you are intubated, and the doctors don’t know about a critical allergy you have.

2. You are out camping and your SUV runs off the road. The headlights are smashed, no one will see the hillside you’ve gone down and the car is lodged between several large boulders.  The rear hatch is smashed shut and you can’t find that emergency hammer.

3. You are flying an airplane under difficult conditions and you need to make sure you’ve tuned in to the right navigation beacon. But that’s on a map and bouncing around you’re not sure you can control the airplane and the radio navigation system safely under these conditions.

4. The end has finally happened and an EMP has taken down the power grid.  A few of your neighbors decide to use flashlights to set up a signal system to relay news and reports of intruders…but what light signals to use?

5. You’ve actually gotten your Technician Class ham license and on a bet with a friend, you want to make a Morse contact with someone on another continent.

In each of these use cases, having a working knowledge of Morse Code makes a critical difference. Let’s go through each example and I’ll show you what I mean.

In the case of the accident or stroke, your partner happens to be able to tell doctors that there is a tiny code oscillator you carry with you.  With a bit of Velcro, the unit is attached to the hospital bed.  Suddenly, you’re able to communicate critical information about your health and that drug allergy that might otherwise have killed you.

In the case of the SUV over the cliff, a simple SOS  (three short is “S” three long is “O” and another three short and, as luck would have it, a group of Scouts working on their ham radio license at a camp a mile or so distant makes out your call and rescue efforts begin.

In the case of the airplane, a real-life training incident was pulled on me by my flight instructor in 2011.  He tuned the navigation radio to 117.3 MHz and demanded “You hear that signal – can you find it on the chart? ”  This was a timed exercise and I aced it: “Why that -.-.   …-   –. Means CVG – so you’ve tuned in Cleveland Ohio.

A quick spin of the dial and I knew exactly the bearing to Cleveland..and without using the GPS.  By the way, this was a first for my flight instructor.

In the event of EMP, Morse is likely to come back into its own on many fronts.  For one, it is faster than texting.  And, unlike texting, which requires gobs of infrastructure, Morse can be transmitted on certain radio frequencies (the lower ham bands in the high frequency spectrum) are about as robust as can be for communications at all distances.

Even simple radios can do Morse.  For example, you can pick up a DIY 40-meter, 7 MHz band, kit on Amazon for under $20 and be able with some patience to “work the world.”

An EMP, along with major earthquakes, will leave most people without communications within 48 hours. True, years ago, telephone Central Offices were equipped to operate for one week or longer following power outages.  But we live in a world of value optimization. Only a few cell towers have more than 48 hours of life in them when the power goes.

And that gets us circled around to the point about being able to communicate anywhere in the world for less than $500, if you put your mind to it:  Sure, single side-band voice will do the trick, but that requires a General Class Ham ticket from the FCC.  Not that it’s a hard license to get:  Anyone can score one with a little study.

But, if you already have a couple of those under $50 two-meter radios (such as the Baofeng), the same Technician Class license will let you carry out Morse conversations on the 80, 40, and 15 meter ham bands. That’s around 3.5, 7, and 21 MHz.

Morse is not only flexible, gets through noise well, and is self-encrypting (limited by who can copy Code, right?).  But in addition, it can be used for many related hobbies.  Forget my buddy who talks over half the country from his ham radio set up in his travel trailer.  I’m talking unique uses.

When I was still in high school, I played chess with a good looking lady in her early 20’s who lived in the outback of British Columbia.

Then there are just time times when talking isn’t as good as Morse code.

Lounging sleepily in bed on a Sunday morning, touch can ask “BKFST?”

The unspoken (but digital) answer?

As far as I am concerned, the applications of being a “digital-capable human” are not widely appreciated.  So, in Part 2, we’ll go through the evolution of how people have been learning Morse for over a hundred years.

Without diminishing the importance of communication in a SHTF world, sometimes we need a bit of levity to convince us that a particular skill is actually needed for survival.  So, even if you are not motivated to get your Technician license for Ham radio, consider learning a few Morse code basics.

Still need some encouragement?  My friend Rob Richardson has written this article which gives further credence to Why Morse code is Still Relevant: Learning Morse Code for Survival.  I think you will like it, plus, he has a couple of excellent recommendations for learning Morse code including Morse Code Teacher by Gordon West.

Finally, if you are interested in learning more about emergency communications, I highly recommend Jim Cobb’s book, Prepper’s Communication Handbook.

If you enjoyed this article, consider subscribing to email updates.  When you do, you will receive a free, downloadable copy of my e-Book, The Emergency Food Buyer’s Guide.

You can also vote for Backdoor Survival daily at Top Prepper Websites!

Bargain Bin:  Below you will find links to the items related to today’s article.

Morse Code Teacher: This two-CD audio course recorded by Gordon West will teach you the fundamentals of Morse code.

Prepper’s Communication Handbook: Lifesaving Strategies for Staying in Contact During and After a Disaster:  This is another one of Jim Cobb’s well-written handbooks.  He writes about various communications strategies in a manner that is easy to read and easy to understand.

BaoFeng UV5R Dual-Band Two-Way Radio:  I own two of these.  Something to keep in mind that if you are just planning to listen, you do not need a license.  Still, it is a good idea because it will make understanding the technical aspects of HAM radio a whole lot easier.

Special Note:  BaoFeng and Pofung radios are one and the same.  Some of the newer units are branded with “Pofung”.

:  These come in very handy.  Also consider the NAGOYA Antenna for BAOFENG UV-5R  and the USB Programming Cable for Baofeng UV-5R UV-3R+.

: The best directory of frequencies for the 21,800+ repeaters around the country! Includes D-Star and APCO-25, references for operating practices, tips for handling interference, emergency message handling, guidelines for severe weather reporting to SKYWARN and the National Weather Service, and more. Now organized by city and state for US and Canada.

Which are the best oils for your survival kit?  This article describes my top picks. 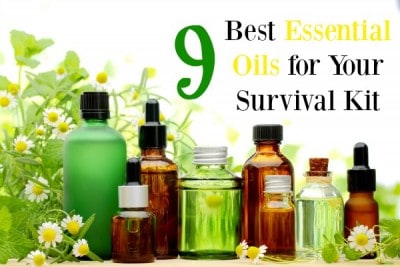