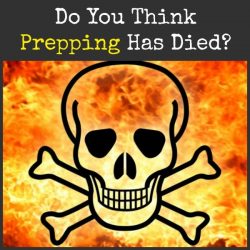 Shortly after the 2016 election, I read an article by one of my blogging colleagues titled “Is Prepping Dead?”. I felt so strongly about what she said that I shared her article throughout the social media, hoping that others would see it and continue their preparedness efforts. Now, one month later, I can confirm that I too am seeing signs that prepping, while not dead, has certainly slowed down. This seems odd to me since the likelihood of a disruptive event has not changed. It is as strong now as ever.

What are those signals and why should we continue to be prepared and to proudly call ourselves “Preppers”?

The post Do You Think Prepping Has Died? by Gaye Levy first appeared on Backdoor Survival.