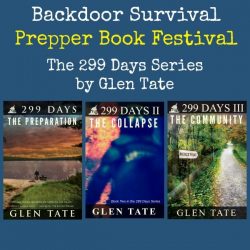 The very first Prepper Book Festival occurred in 2012. Where has the time gone? In looking back, many of the books featured at that time have become a distant memory while others have become classics. One of the books that has withstood the test of time was the first book in the 299 Days Series by Glen Tate.

It seems like a fitting finale to this round of books is to feature the entire 299 Days Series. Now ten books strong, I have an encore interview with Glen plus a set of the first three books in the series to offer up as a giveaway.