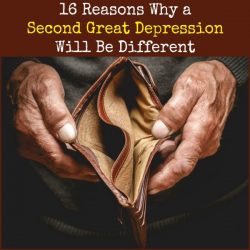 It is no secret that prepper-types use the Great Depression as an example of what can and will happen when the stuff hits the fan. We do this because the possibility of a national or even a global economic collapse is something we prepare for.

Learning about life during the Great Depression has its value and the lessons we can learn will go a long way in helping us formulate our own plan for survival under such dire economic circumstances. That being said, life in the 21st century is much different than it was during the thirties. This makes it important to toss some modern realism into the mix. Here are both reasons and facts why a second Great Depression will be different the next time around.

The post 16 Reasons Why a Second Great Depression Will Be Different by Gaye Levy first appeared on Backdoor Survival.