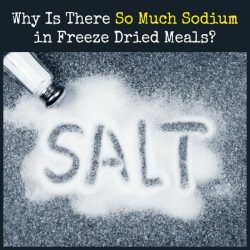 A lingering question in the minds of many preppers is “why the heck do freeze dried entrees have such a high sodium content?.” I had my own thoughts on the matter but they were unconfirmed so I decided to take the question to my two favorite freeze dried meal companies, Mountain House and Legacy Food Storage.

In this special report, I am sharing their responses and invite you to come to your own conclusions.

The post Why Is There So Much Sodium in Freeze Dried Meals? first appeared on Backdoor Survival.