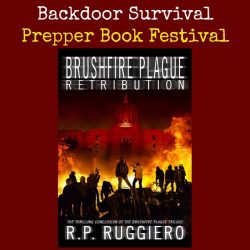 One of the first post-apocalyptic fiction books I read was Brushfire Plague. I liked it so much that I left a review on Amazon which is something I almost never do (shame on me). The day the second book in the Brushfire Plague trilogy was released, I scooped it up and read it. Finally, we have the third book, Brushfire Plague Retribution, and it is another winner.

The Brushfire Plague series by R.P. Ruggiero, for me, set the standard for survival fiction. I liked that the characters were interesting and even more important, believable. They were strong, but they also had their weaknesses, just like we do. Perhaps most important, the books were a reminder that no matter what happens, we need to stay in touch with our relationships and the human side of prepping. With that introduction, I am thrilled to share an all-new interview with R.P. plus I have three copies of his book up for grabs in a giveaway. Enjoy the interview then be sure to check in to learn about the giveaway.